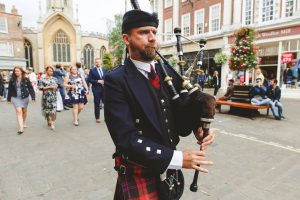 A Lifetime of Bagpiping…

I am a professional bagpiper with over 25 years experience. I began learning at the age of 11 after falling in love with the sound of the pipes whilst on holiday in Aberfeldy, Scotland. My mother being Scottish encouraged me to learn and asked a piper named Alec Maclean to teach me. Alec kindly dedicated much of his free time to teaching me and eventually introduced me to The Seaforth Highlanders, based in Mansfield. I performed with them for almost two years. This involved playing at weddings, carnivals and remembrance day parades. As my piping improved I craved new challenges so Alec introduced me to the Ashbourne Pipes and Drums band.  I competed and performed with them for several years in grades 3 and 4. In recent years I have been a prominent member of Manchester Phoenix Pipe Band and competed with the band at major championships. In 2016 and 2018 we won the All England Championships at Chatsworth.

Some of the public events I  have played at include:

I’m booked every year to play at Abbeydale Omega in Sheffield for their Burns night celebrations.  I play guests into dinner at the Thorpe Park Hotel each year in Leeds for their New Years Eve ball and I play the New Year in at Napoleon’s Casino in Hillsborough, Sheffield. A number of funeral directors in Sheffield, Leeds, Barnsley, Manchester, and  Nottingham frequently use me as their first port of call when their clients need a bagpiper.

I have been teaching the bagpipes at the Army Foundation College in Harrogate for over seven years. This involves taking a class of beginners every Monday evening. I also teach privately from home and I have two students that have become full time members of The Sheffield Pipe Band.

Available For Any Occasion

I am currently available to hire for public and private functions including weddings, funerals, birthday parties, and corporate events, etc. I play a mixture of traditional and modern Scottish and Irish music and I am always happy to learn specific tunes for bookings provided I am given enough notice. When booked for events I always aim to arrive an hour prior to my start time. This allows for any minor traffic issues and it gives me time to setup and get my pipes in tune and singing beautifully.

I run the website www.scottishpipersforhire.com and I have a network of professional bagpipers from all over the UK. If I’m not available for any event I can always supply an alternative piper or if I’m booked for an event and I fall ill (very rarely does anything stop me from playing the pipes!!!!) I can provide a suitable alternative